Change through trade – time for a paradigm shift

People in Iran suffer massively under the current regime of Supreme Leader Ali Khamenei. There are multiple layers of people’s plights caused by the regime and its fascist-like ideology. Due to the regimes ideology, several ethnic and religious groups are exposed to discrimination, hate and continuous torment. Regular medical treatment is being refused to several prisoners of conscience or even worse some are given harmful medication. Moreover, freedom of speech and thought are being heavily violated by the regimes institutions throughout the last decades. Even people of Iranian origin living abroad are being targeted with death threats or subjected to supervision by agents of the regime.

Martin Lessenthin, speaker of the board at IGFM, opened this symposium referring to last year’s symposium 2019 held in Berlin. This year’s digital event had several speakers focussing on the deplorable situation of Baha’is, Christians, Kurds, Sufis, journalists, the Alternative Nobel Peace prize laureate Nasrin Sotoudeh and the German-Iranian architect Nahid Taghavi who has been jailed lately in Iran. So many more individuals and groups could have been mentioned as the plights of the Iranian population are innumerable.

Several street protests have been organized throughout the year by IGFM in order to raise awareness for the plight of so many Iranians who are under severe pressure from their regime. During the symposium, Valerio Krüger, a member of IGFM, introduced a campaign that runs in cooperation with several Members of the German Bundestag or professional politicians who each adopt an individual political prisoner in Iran, which is being communicated to the Iranian embassy to make clear that these persons and what is done to them is being monitored.

The huge variety of serious plights

Jascha Noltenius, Berlin, spoke on behalf of the Baha’i about attacks and arrests of Baha’i citizens. Kamal Sido, Göttingen, speaker of the Society for Threatened People (GfbV), stressed on the dire life of Kurds and Sunnis. Michaela Koller, Frankfurt, speaker for religious freedom at IGFM, described the threatened lives of Christians in Iran. Mrs Shiva Shafahi, who heads a women centre in Mainz, described her commitment for Nasrin Sotoudeh, a lawyer involved with children’s rights and working on cases of women and minorities who fight for their rights, whereas Mariam Claren described how she is fighting to bring her mother’s (Nahid Taghavi) arrest in Iran to the attention of German public and persons responsible. Before her mother was arrested under no published accusations, Mrs Claren described to have lived in a bubble not being aware of human rights issues, but now her eyes were opened.

Mina Ahadi, whose husband was executed in Iran and who has experienced jail herself, warned insistently that death sentence in Iran will result in more and more executions, if the international community will not act in order to the regime. Kamran Safiarian, a Mainz based journalist affiliated to ZDF, reported that journalists might not be safe from the agents of Iran even in Europe. Dr Rahim Schmidt, a physician and specialist on intercultural medicine and former Member of the German Bundestag, presented his reasons for engaging for Nasrin Sotoudeh and shared his opinion on the dangers of the Iranian state-ideology for the region and for Germany, too.

Mr Helmut Gabel, Hannover, head of Iran background information website mehriran.de, brought the situation of Gonabadi Dervishes in Iran to attention. He referred to information he had previously received from Hamid Gharagozloo, Washington, who is a speaker of the International Organisation to Preserve Human Rights. Mr Gharagozloo often reports to Sam Brownback, Ambassador at Large for International Religious Freedom, on persecuted religious groups in Iran.

According to Mr Gharagozloo there are 8 imprisoned Dervishes of whom one Dervish faces serious challenges. Mr Behnam Mahjoubi is furloughed between the mental asylum where psychosis inducing drugs are administered to him, and Qarchak prison. They all are in prison for over 1,030 days with no end in sight.

One appalling fact concerning the renown Nematollah Gonabadi Sufi Order is how regime agents took it over after the suspicious death of its last Qutb (pole of wisdom) Dr Nour Ali Tabandeh, a former judge and lawyer, in December 2019, who had been held under house arrest for more than a year. Several regional Sheiks have died since under suspicious circumstances and have been replaced by agents of the regime. The new responsible for the order, a religious scholar named Kashani, ordered the members to connect and learn from state Ayatollahs.

Mr Gharagozloo and many other informed Human Rights activists say that the regime has worked hard to get hold of the order with its 8-10 million members.

Firstly, the order attracted many young people during the last decade. The terrorist version of Islam that the state had imposed on the society drove people away from state mosques and they found a haven in the teachings of Dr Nour Ali Tabandeh, who based his wisdom on separation between state and religion and free individuals. This could not be tolerated by the companions of the Supreme Leader Ali Khamenei and the IRGC. Now the Mullahs want to use the good reputation of the order to mask their methods and intentions.

Second, the revenues from the donations of so many members are money that is not lost due to sanctions and can be used by the deep state institutions in order to follow their hidden plans of conquering minds and hearts for their system and work on the expansion of their blood-thirsty ideology throughout the world.

Change through trade has desperately failed

Towards the end of the symposium Mr Gabel summarized that all speaker had shown the variety and multitude of Human Rights violations by the regime in Iran and pointed out that this has been happening for longer than 40 years and should be brought to an end. He proposed to continue the conferences and symposiums on the human rights situation Iran and to bring to the attention of the public individual cases. Further he appealed to organize a meeting between Human Rights Organisations and German politicians to work on a integral strategy to approach Iran’s dreadful human rights violations in a more effective and sustainable way.

As the EU and many European governments believe that Iran might react positively to the principle of change through trade, they keep on trying to have conversations with Iran’s representatives behind the scene in order to encourage the regime to respect the rights of its citizens and therefore have financial aids and economic deals with the EU. History has shown that this paradigm does not foster desirable results. Iran claims it rejects all interference in its inner affairs. That is a truly interesting claim, as Iran constantly interferes in at least neighbouring countries affairs. Additionally, the international community slowly comprehends the ideology and realizes the strategy and abhorrent plans of the regime.

What can be done

Mr Gabel proposed to shift the paradigm. He named several fields of possible action to pressure the regime in Iran in order to act according to humane and constitutional principles instead of destructive and blood-shedding manners.

Gabel pointed to the possibility to stop academic exchange programs, to stop medical care for regime violators in German or EU hospitals, to prevent regime officers, managers and finance experts from entering the EU, to prevent regime agents to spread their ideology in the name of a religion in the EU and to set the condition of mentioning human rights cases within each public meeting held to negotiate economic deals and to report about it in main stream media.

These are only few fields of possible activities to pressure the regime and to save precious lives in Iran. The regime and its ideologues unfortunately only understand and change behaviour if their own privileges are at stake. 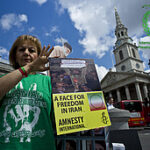 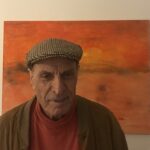 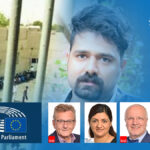 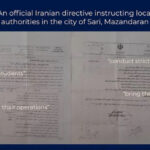